The group of works entitled “PARADISE NOW” is an ongoing experiment. In the theory of probability, a random experiment is an experimental setup with a “random” outcome. It allows for a series of executions, or experiments of equal value, independent of each other.

Although the result of each individual experiment is random, regularities can be observed if there are sufficient repetitions. 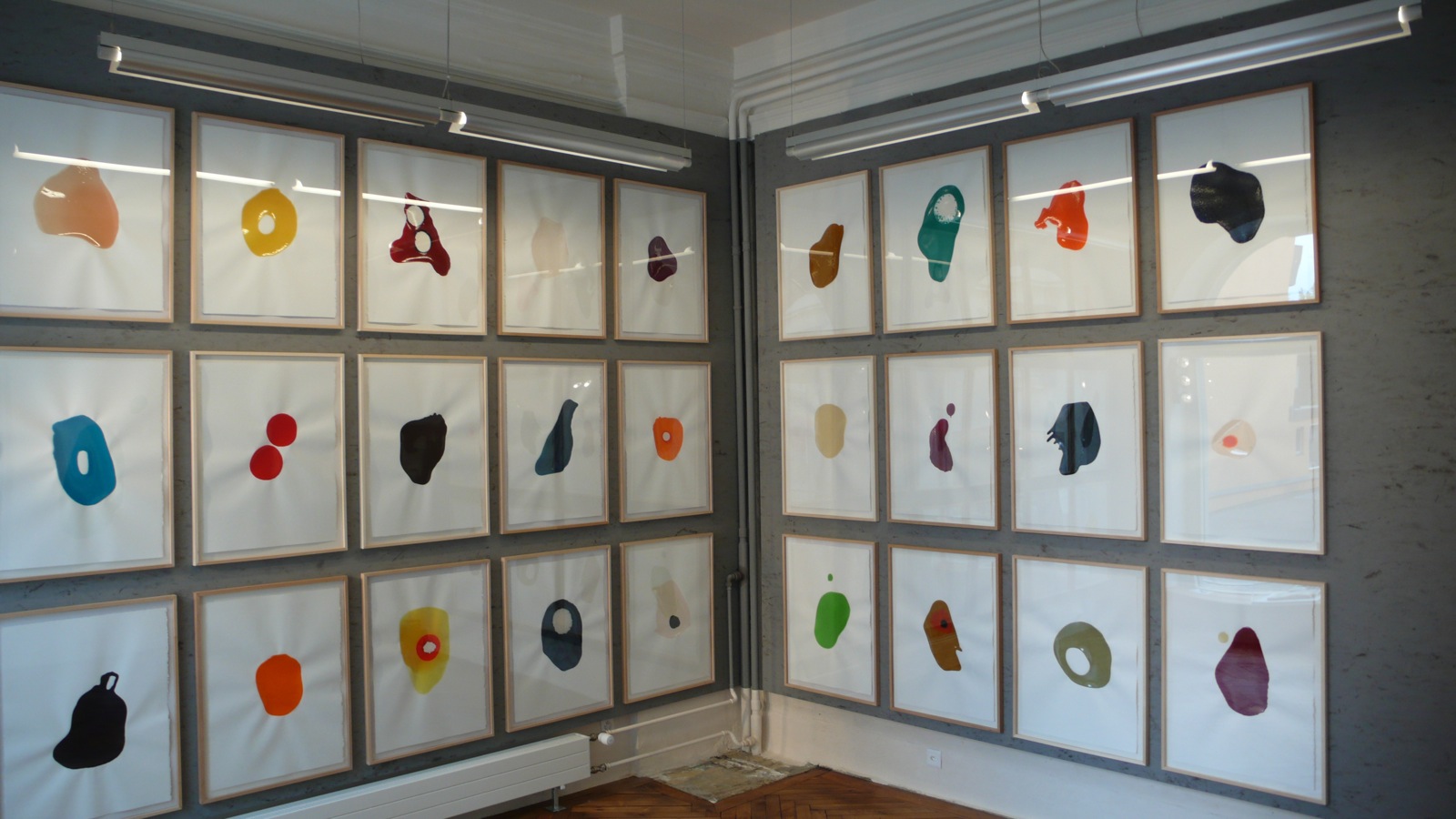 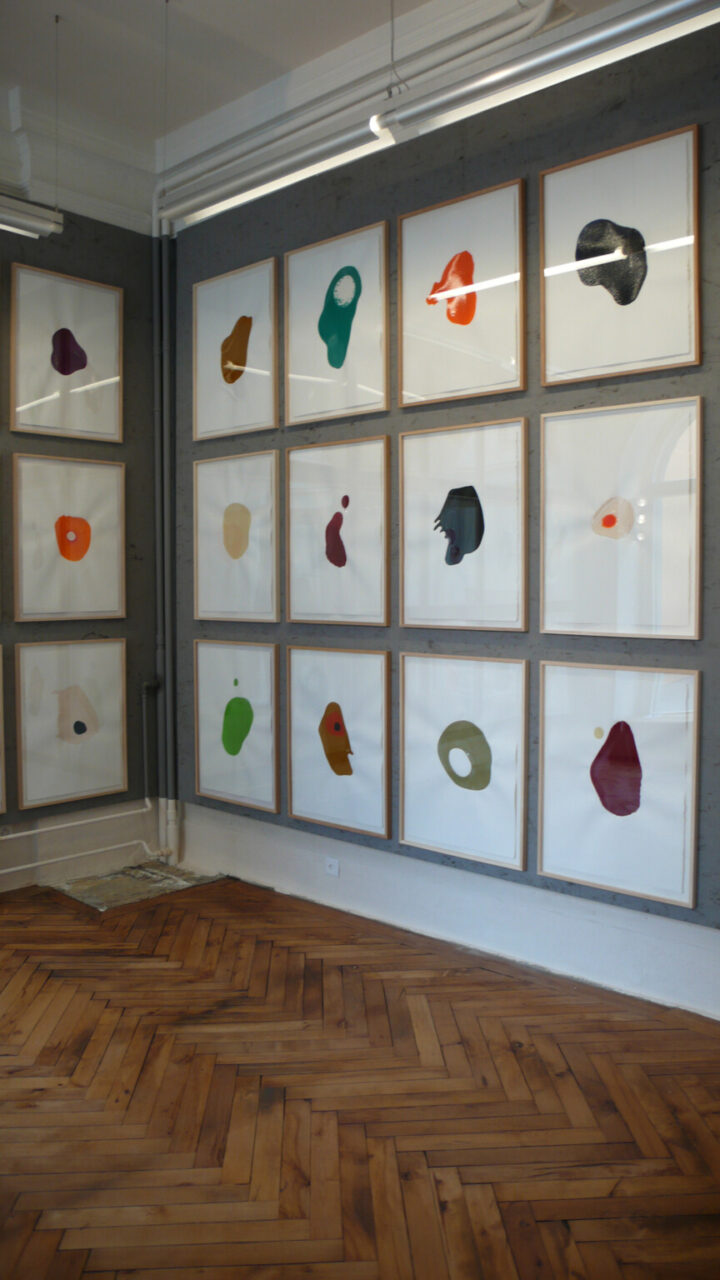 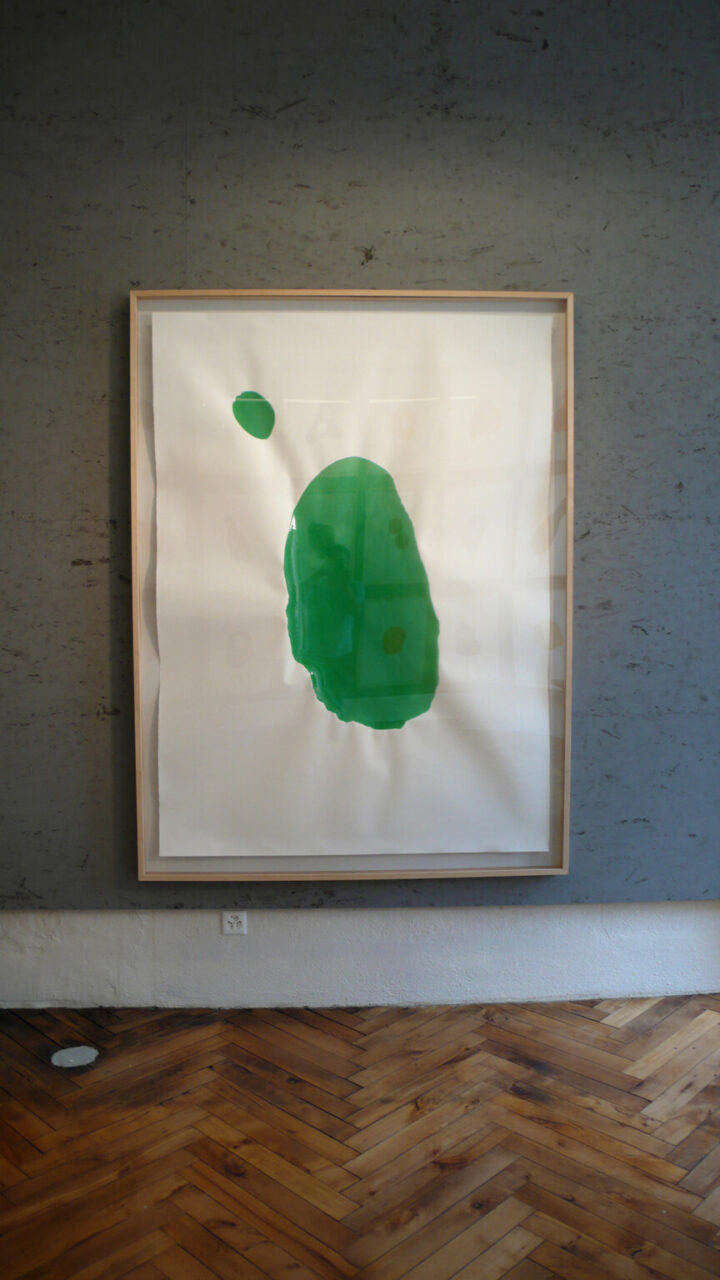 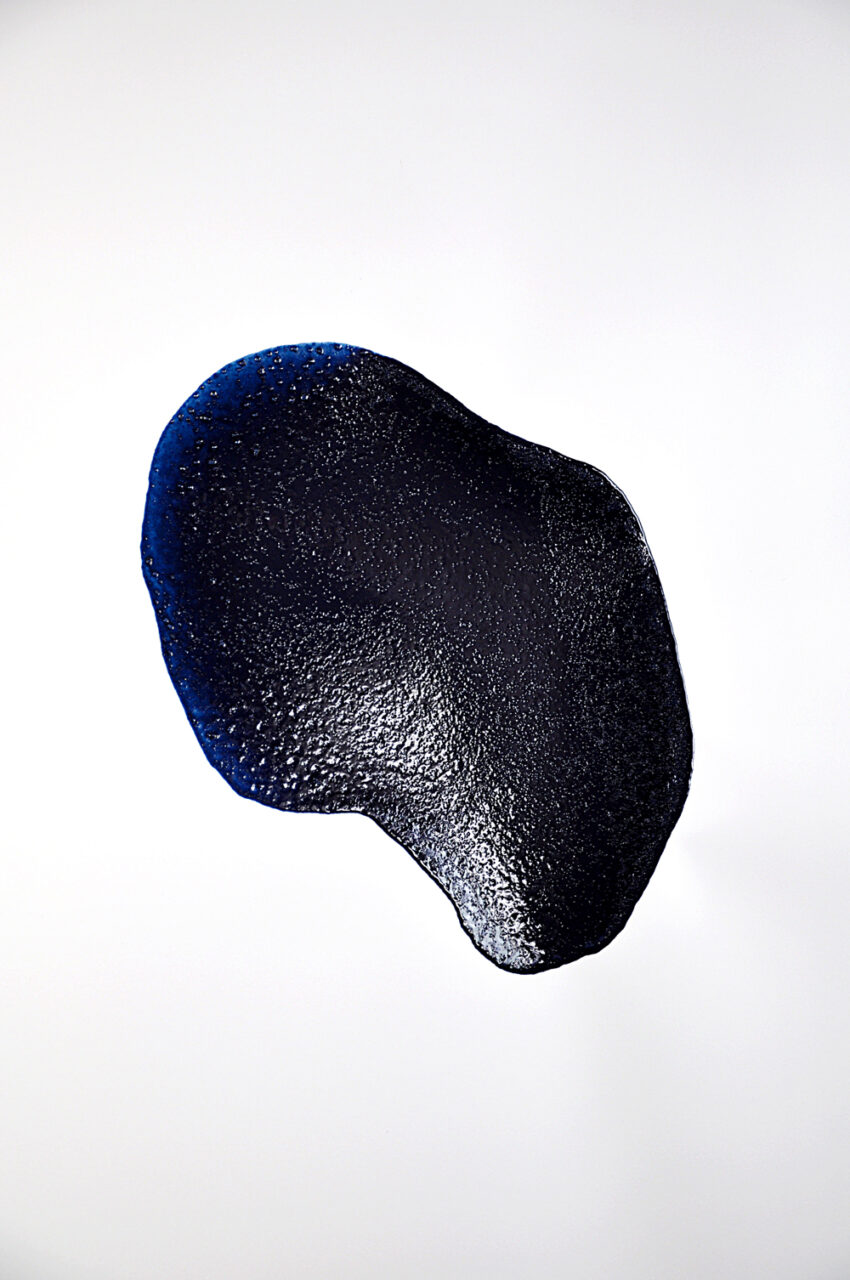 The Rumours About the Blotches Are All True.

We are excited about another collaboration with Franziska Mueller & Tobias Lambrecht who have in the past composed a short-story about our exhibition „Der Durchgang“. Enjoy!

The talents of artist duo Jahic/Roethlisberger were evident early on: at just eleven months old they were able to whistle Johann Sebastian Bach’s Air perfectly. What followed was an unparalleled career. They wanted knowledge, the world was their oyster, and they were on the way up when a gallerist engaged one of the pair in conversation. However, three terrible things came to pass before then:

Firstly, Jahic/Roethlisberger pitched a YouTube video to musician Lenny Kravitz which they sketched out for him; Kravitz seemed interested, but for reasons as yet unknown Jahic/Roethlisberger never delivered the images. If the debtor is in default, Article 103 Paragraph I of the Code of Obligations stipulates that he must pay damages for late fulfilment and is also responsible for coincidental liability. Kravitz never claimed the damages which were due to him, the artist duo was left with the liability. Even when events are repeated until they are unrecognisable, there is still an average.

Secondly, Jahic/Roethlisberger tried to sell their works under the name Monica Monkeybone. Kind of cheap, kind of tacky, not shy of a bit of razzle-dazzle. “We’re trying to deflect attention from ourselves,” said Jahic/Roethlisberger. And according to Rolling Stone they’re no longer inclined to play up to their reputation as spoilsports.

Rolling Stone: What’s so good about being Jahic or Roethlisberger?

J/R: That was just a label, our entry ticket to the art world, because there are only very few duos. Our goal is to make our audience happy. We’ll leave the declarations to the politicians.

RS: Do you have role models?

J/R: We want to move through life like a Karate Kid.

RS: Isn’t it about time that you went back to being just Jahic/Roethlisberger?

J/R: Maybe, but who would want that?

Monica Monkeybone subsequently achieved blogging success with www.therealmonkeybone.org (at the time of going to print this URL was available to purchase).

Thirdly, a statuesque blonde walks into a gallery opening, rips the microphone from the man at the keyboard and loudly announces that she really likes Jahic or perhaps Roethlisberger. When someone asks to see her invitation she silently grabs the nearest intern and kisses him deeply without taking her eyes off Jahic/Roethlisberger for a moment. The intern begins twitching wildly, whereupon the blonde drops him like a packet of crisps, moving away from him with her mouth smeared with blood before spitting something red and organic onto the nearest canvas.

“For all the single ladies” says the lady decisively, spitting another stream of blood on the table covering and steering her way through the perplexed crowd towards Jahic or Roethtlisberger like a Rubens fantasy come to life. The woman emits a deep bellow as a gallerist tries to hit her from behind with a broomstick. “What’s she saying?” asks someone in the back of the crowd. “What’s love got to do/got to do with it,” comes Kravitz’s matter-of-fact reply.

Broomstick in hand, the gallerist stumbles frantically over the gurgling intern and hits the blonde on her left shoulder. But it’s only grievous bodily harm if permanent marks or mortal danger are involved. Broken bones, gunshot wounds, even infection with disease merely count as minor bodily injury. If a dangerous weapon is used it counts as qualified minor bodily injury. Her hollow roar (What’s looove) sends white wine spilling by the gallon as she falls to the floor like a felled tree. A long pause, a deep intake of breath, a brief break in hostilities. The tongueless intern whimpers, an elegant lady brings ice. What’s looove she coos to him reassuringly, over and over: What’s looove.

The gallerist towers over the blonde, lying on the ground like a fallen tree. But just as he crouches down to her she rips the broom from his hand, slits open his abdomen and his guts plop out onto serviettes, splattering over everything – the art, the finger food; something greeny-grey strikes an ear, the opening night guests start skidding all over the place, feet slithering; no-one has a steady footing and the gallerist howls ever louder, ever shriller: The fall has completely shattered his shinbone which now rears out of his leather shoe. The blonde, her shoulders bare and smeared, roaring the house down, wriggles one of the intern’s socks off, fills it with an Arp stone and with a mighty swing brings the club down on the nape of the patron’s neck.

Her neck breaks with a deep crack, the force of it lodging a plastic fork in her gums. A piece of sushi mixed with vodka and orange, teeth, bits of lip and other organic material rolls out of the sponsor’s mouth and the whole oily syrup slops from canvas to canvas. It stinks, the guests are throwing up, the vomit spraying in bright blotches all over, each pile of entrails more colourful than the last, mouths slobbering vomit, slivers in all their cavities (eye sockets, anus, genitals) – a fine welcome. Falling, the gurgling sponsor hits a journalist, the journalist falls, his nostrils skewering on the gallerist’s shinbone, he groans, everything whimpers and winds in a surging, spewing swirl of grey matter which, instead of combining with the shrimp cocktails as expected, dissolves into a flaky broth. A stench like the bottom of a compost bin goes forth and fans out. The blonde pulls herself together and advances on Jahic/Roethlisberger. She reaches the buffet, tosses a few tiny plastic glasses of white wine, reaches for a tomato-mozzarella skewer and rams it into the left eye of either Jahic or Roethlisberger, once, twice. Jahic or Roethlisberger sinks to his knees, falls facedown, forcing the skewer even further in the direction of travel. She reaches the window in two paces, tosses a bone out into the night air and whispers something into the microphone (“we share so many secrets”) before she descends into the deep with a blank stare. She might not have been wearing underwear; no-one can say for sure, the photos are too blurry.

So the grand gala turns grand guignol, a great flop stinking of damp mushrooms. Forks protrude from gums. The patron gasps her last breath in profile: “the scroungers…the scroungers.” The tumult dies down. The whimpering dies away. Calm is restored.

When asked what might have triggered this attack on Jahic/Roethlisberger, the gallery issued the following statement: “Just because you’re humble doesn’t mean you’re a good person.”

Jahic/Roethlisberger: On the front row by day, at gallery openings by night – Vogue was there.

Monday’s gallery opening attracted a number of celebrities – including Lenny Kravitz. The 49-year-old wore black leather trousers with a matching v-necked T-shirt paired with a slim-line jacket in metallic black and blue. The “Fly Away” singer had tamed his mane with a stylish beanie, classic Ray Ban Aviators shielding his eyes from the glare. Little did he know that this look fit the theme of the exhibition perfectly. Jahic/Roethlisberger rear up like a humpback whale from a mountain of intestines, one or the other missing his left eye. A fibrous stump for a thigh and a severed nose completed the look. Celebrations continued until the early hours. But the evening wasn’t completely trouble-free: “Please refrain from filming or taking photographs, even with your mobile phone,” Jahic/Roethlisberger said to one of the last visitors. “I have to capture this for when I handover the space,” she replied, “I’m the gallerist.”

“So you know when Playboy are supposed to show up?”

“They were already here, just before Rolling Stone. The gentleman said you can expect to hear from them. They’re after something a little less personal.”

“Whatever”: that was statement from Jahic/Roethlisberger, but they’re clearly disappointed. With regard to the opening, Jahic/Roethlisberger provocatively claimed to have had no hand in the art: “The rumours about the blotches are all true.” Asked about the quality of the crowd, the artist duo replied: “To be honest, we would rather hang out with Harry than William. We’re sorry to say it, because now William will say: why don’t you want to hang out with me? But look at it this way. William has Kate. Who does Harry have? Precisely! Us.”

This particular conversation with the gallerist led to nothing; she was no longer interested in representing Jahic/Roethlisberger, whose success had already struck her as suspicious: “RT: ‘recently used’ emojis say a lot about Jahic or Roethlisberger,” she tweeted. 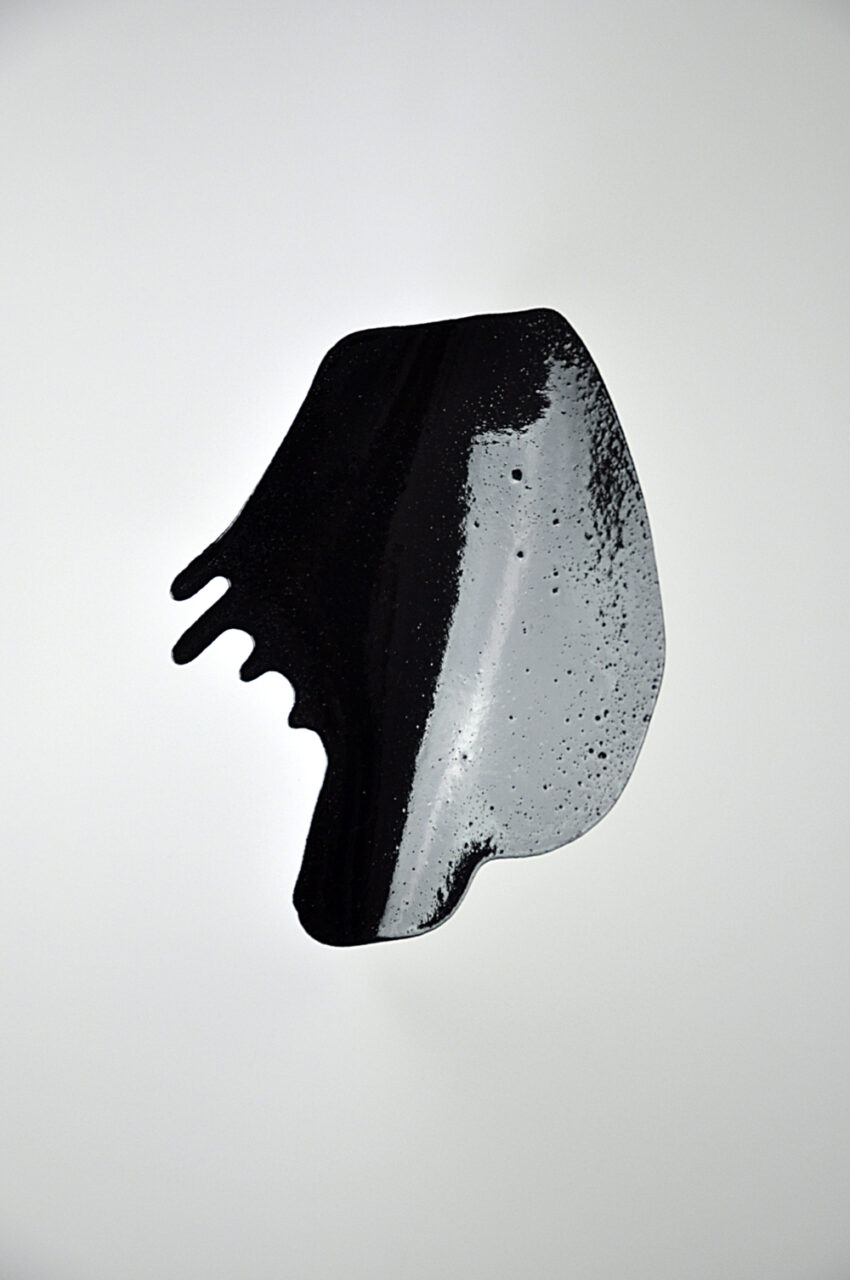 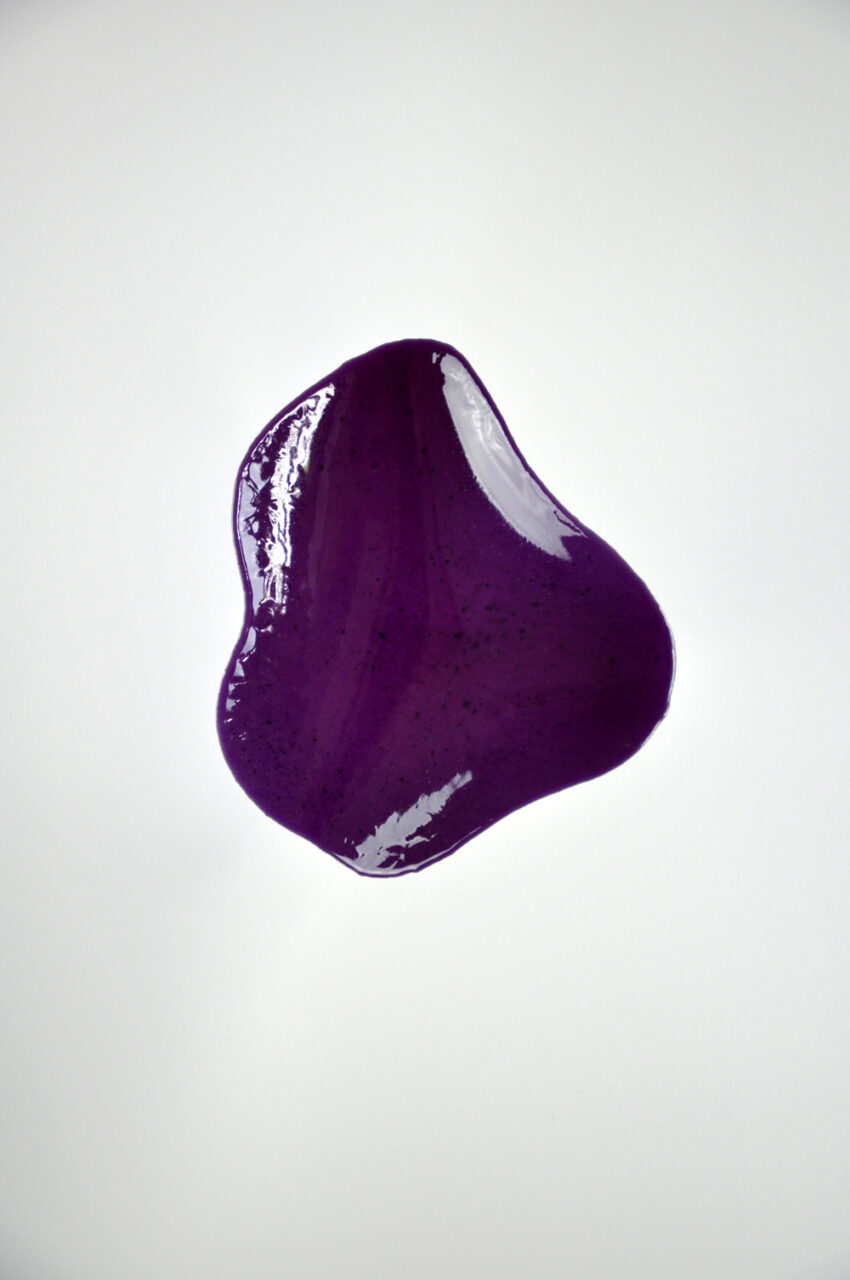 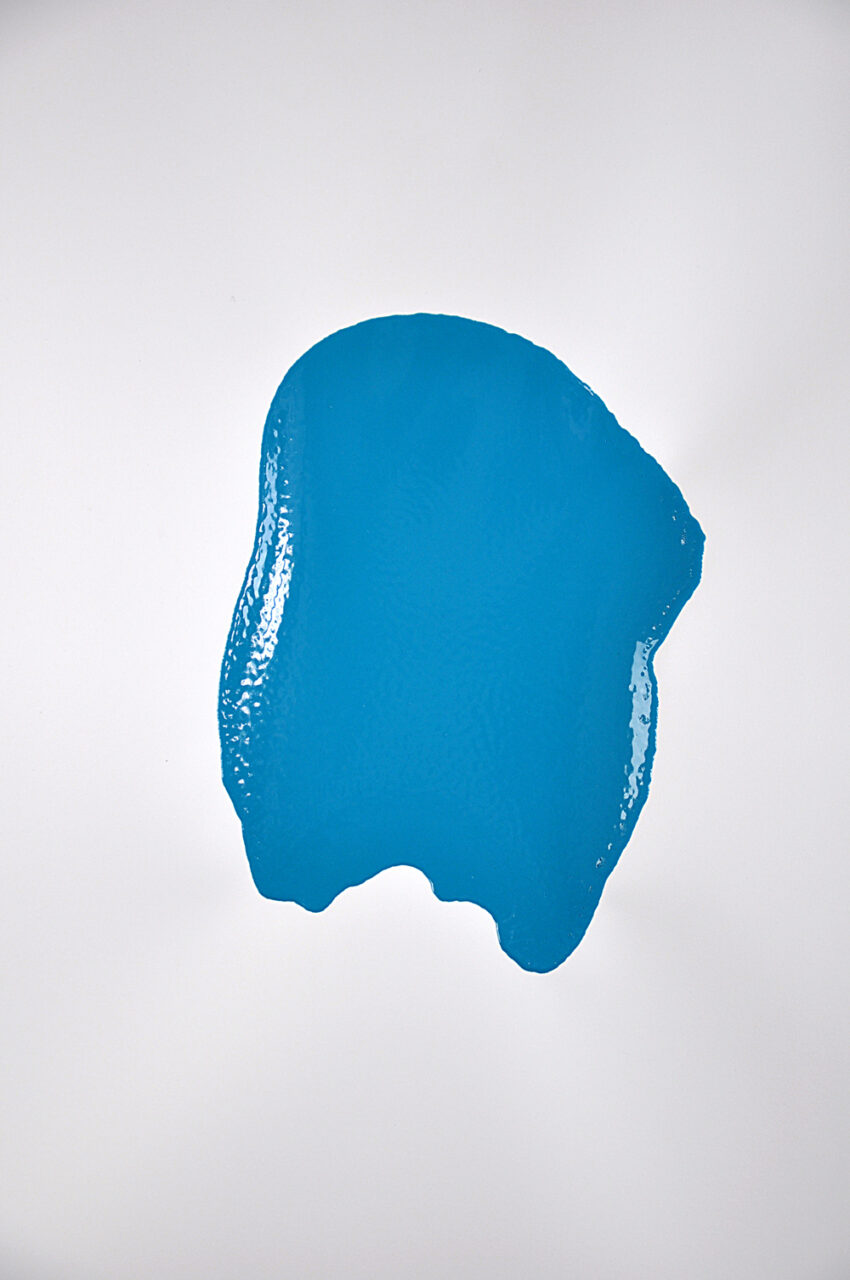 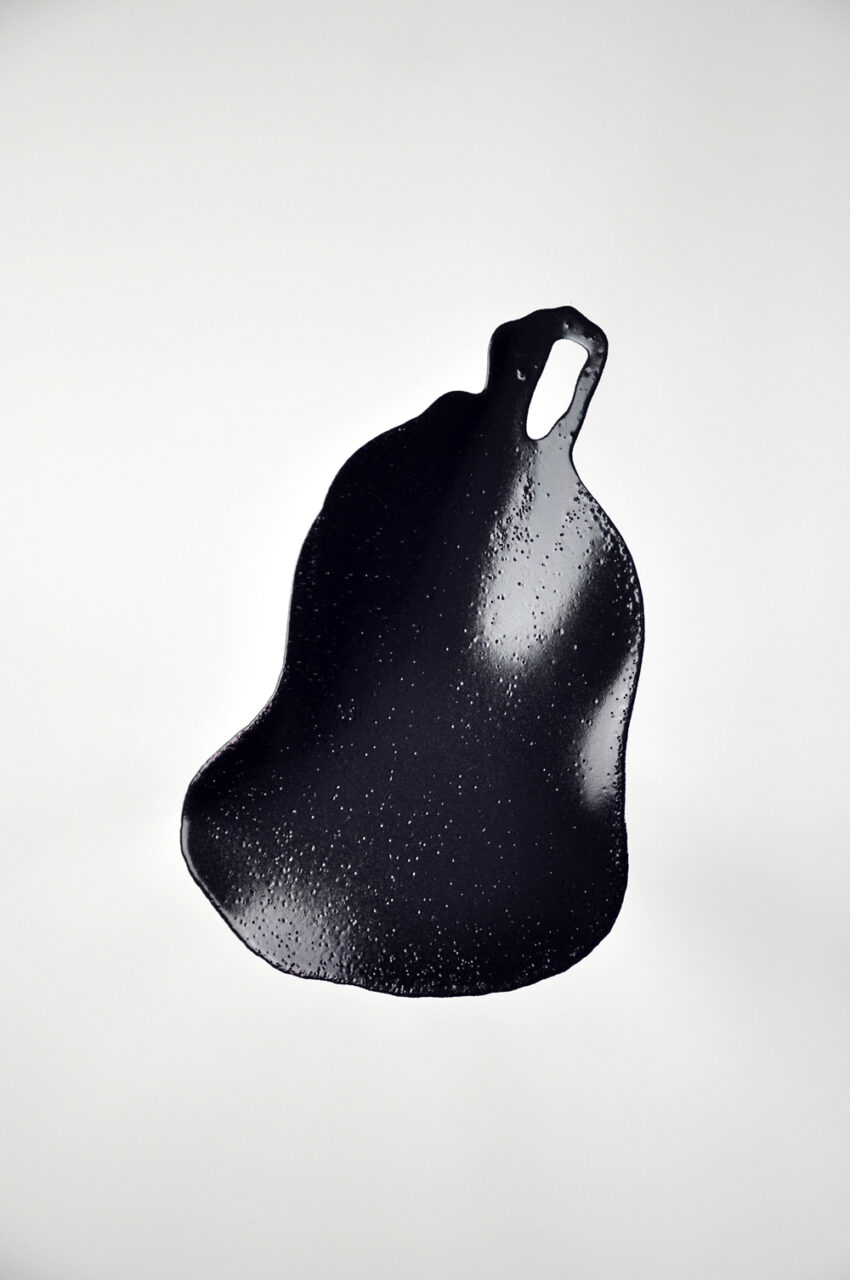 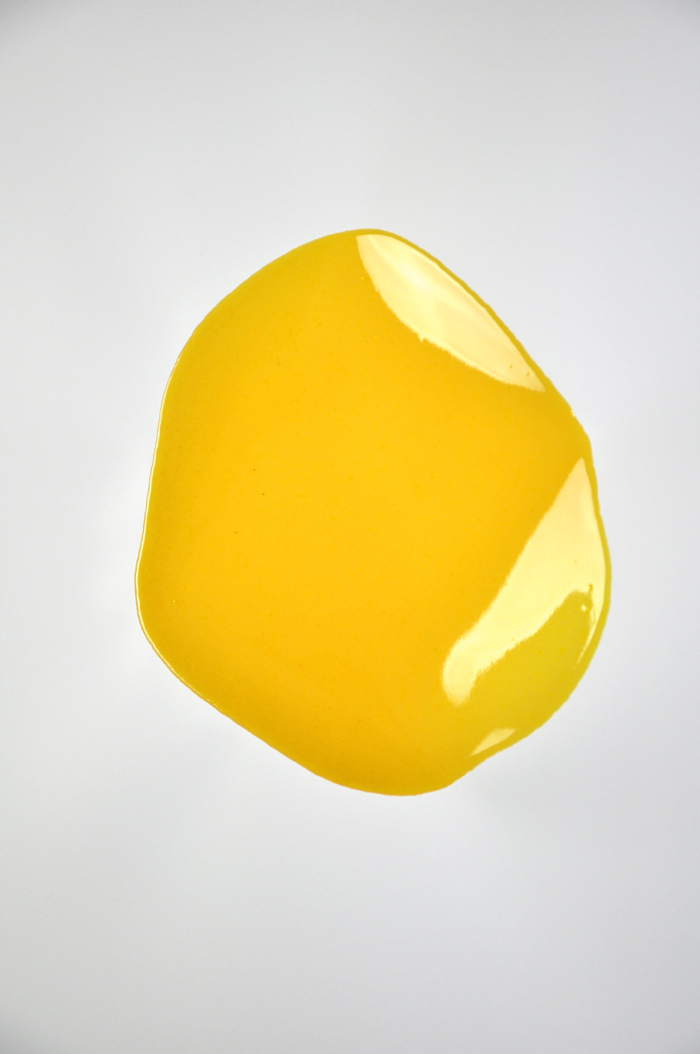 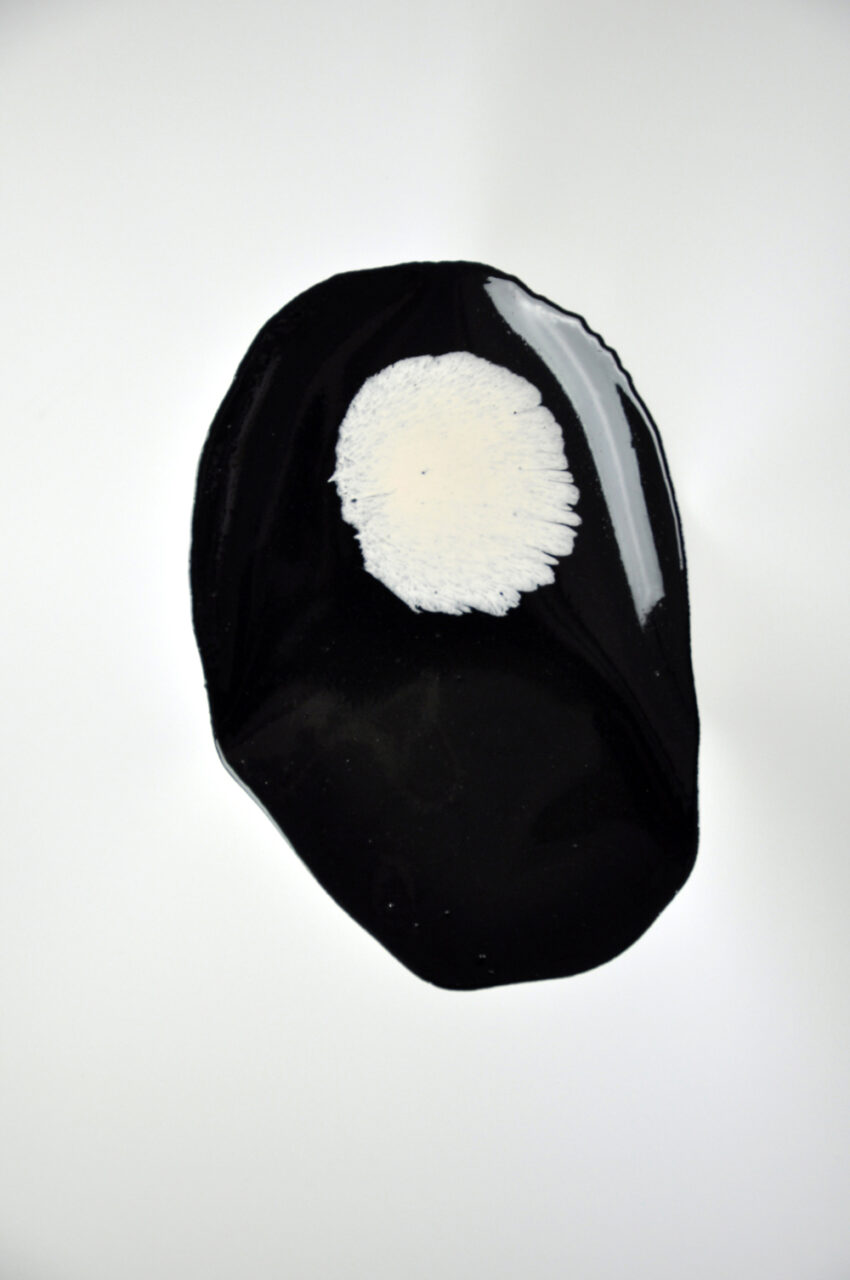 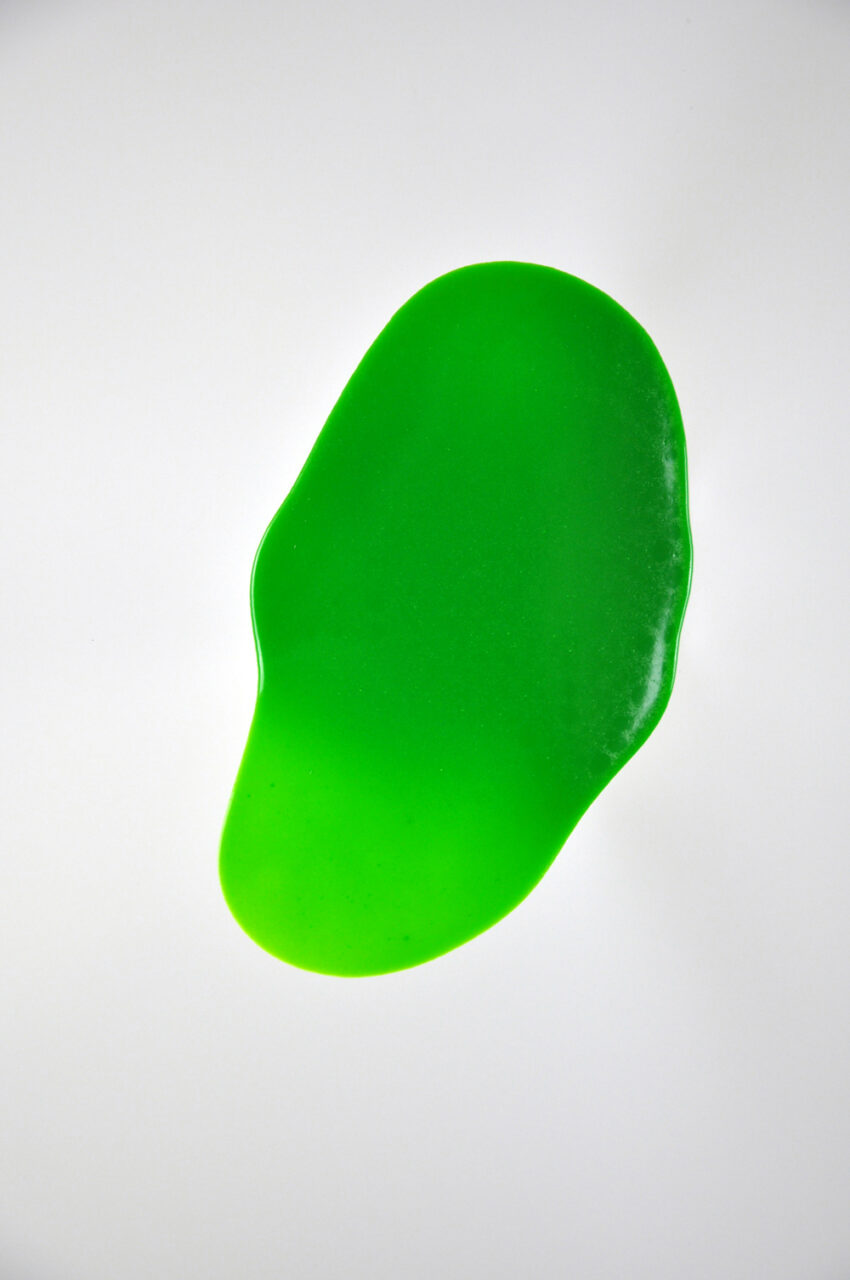